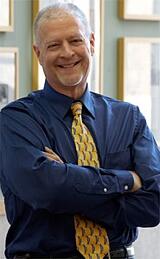 “On September 9, 2009, I started the HMR® Healthy Solutions® program, and I was tired,” says Carl. “Tired of weighing over 300 lbs; tired of looking in the mirror and seeing an elephant staring back at me; tired of my doctor prescribing yet another med to counter another effect of obesity; and tired of just being tired.

“I was attending a company training class and happened to be captured on some photos that were being taken. One photo in particular showed me in a side-view. I was so appalled by the image, I decided something had to be done about my size.”

“Doing a bit of research, I discovered that several of my co-workers had participated in the HMR program and enjoyed considerable success,” Carl says. “I attended an orientation session and decided to join. The item that struck me the hardest was that I had to commit to making a permanent lifestyle change if I ever wanted to get on the path to losing weight and improving my health. Accepting this reality is not easy; putting it into practice is even more difficult.

“But after my first week of enjoying a weight loss, it didn’t take long for the motivation bug to bite. What at first seemed to be a daunting task, this ‘new lifestyle,’ quickly transpired into a regular routine, at least with the foods I was eating. Vegetables were something I hardly ever consumed before HMR, but they soon became my best friends. It took a while to get the physical activity routine going, but that too is now a ‘norm’ rather than an exception.

The tools to succeed

“I am also certain that a key to this transition was the informed, dedicated and caring approach of the HMR staff,” says Carl. “Their knowledge of nutrition, access to proven strategies for successful weight loss, and their willingness to educate and lend support in many ways, play important roles in providing HMR participants with the ‘tools’ they need to be successful.

“I highly recommend HMR Healthy Solutions to anyone serious about improving their health through a weight loss program. Having lost over 100 pounds, I guess I can honestly say, ‘I’m not tired anymore.’”