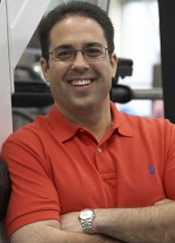 In less than 20 months since joining the HMR program at Milestone, Larry Podlogar lost 100 pounds.

And it all started with a single decision.

“One day I realized, ‘You know what, I’m just miserable. Enough’s enough. I want to change,’” he says.

“I was pretty overweight … I had sleep apnea, my cholesterol was through the roof … my triglycerides were high.”

He did an Internet search and found the HMR program. “I saw there was an orientation, and it was pretty close to my office. So I popped in there and decided it was something I wanted to do, and joined up.”

“The health educators were super,” Larry says. “They were knowledgeable and very supportive.”

“The whole program is approached from an educational standpoint. It’s not as much a ‘rah-rah, lose weight’ kind of thing as it is about lifestyle changes. It doesn’t just focus on the weight loss itself. It focuses on a lot of other aspects of becoming healthy and eating healthy, and I think the weight loss is the by-product of that.”

In addition to losing weight, Larry says, “I’m off of all my medications now. I’m not on any cholesterol or triglyceride medication. My sleep apnea has improved 10-fold.”

Today, Larry still uses HMR® foods at times and also prepares his own meals based on what he learned in the program.

“But I am a restaurant owner, so I do spend a lot of time in restaurants,” he says. “You just learn where you can go and what you can eat.”

He says he’s learned “a plethora of different little things that, when you put them all together, make a difference in how you eat.”

“I haven’t cut down on the amount I consume as much as what I consume,” he says. “I’m still a big eater.”

Building up to exercise

Larry also increased his physical activity as part of the program, although “I wasn’t initially using all the facilities at Milestone,” he says.

“Initially, I got the weight down to the point where I felt like I could exercise again….Once I started using the complete facility, it really made the program and everything that much better.”

Today, he lifts weights, works out with a personal trainer periodically, and participates in a spinning (cycling) class.

“I would say by far Milestone’s one of the best gyms in the city as far as group exercise goes,” he says. “They have a lot of group exercise classes, and I really enjoy those.”

Larry believes that willingness to change is an important part of the process. But, he says, “If you want to make a lifestyle change … and make changes that can be permanent, and you want to take it seriously, then I think this is the kind of program that’s awesome.”