Brett Workman is an IRONMAN!

Ten years ago, then-24-year-old Brett Workman was rushed to the hospital for the fight of his life.  Extreme stomach pain associated with complications from that which would later be officially diagnosed as Crohn’s disease, warranted an emergency appendectomy.  Brett was given a 40% chance to live through that first night in the Intensive Care Unit.  Just having found out a couple weeks before that his wife was pregnant, Brett channeled all his willpower to make it through those long hours, so he could be a part of his daughter’s life.  He had more living to do and more he wanted to accomplish.  Brett refused to let this be the end for him. After a grueling 11-day stint in the hospital (3 days in the ICU) and multiple surgeries, Brett was released from the hospital.  He was put on a strict diet and aggressive treatment program.  He was very diligent in following his doctor’s advice.  His wife Niki was instrumental supporting him during this time, helping him with his medicines and even administering monthly shots to help him gain control over his ailments.  Three years ago, he had improved to the point of not needing to take any more medication, and he has officially been in remission since then.  Brett is very grateful and very compassionate towards those with Crohn’s disease, Colitis, IBS and anything similar.

Brett’s daughter Alexis (now 9 years old) joined the cross-country team and found it to be difficult and she was struggling.  Brett and his wife Niki started running with their daughter, to encourage her.  Niki signed up for a half marathon.  One night, the family was out to dinner and they went to the running shoe store across the street.  Niki saw a flyer for a local triathlon, handed it to Brett and said, “Here’s something for you!” She was joking.  But he looked at it and said, “Okay, I’ll do it.”  Starting in May of 2017 he started training and in August, he completed the Derby City Tri.  Two weeks later he did another triathlon.

Brett volunteered to work the finish line at the Ironman in 2017. Participants had to complete a 2.4 mile swim followed by a 112 mile bike ride, followed by a 26.2 mile run; all done one right after another and having to finish in 16.5 hours or less.  Brett worked the late shift of the finish line, 9pm until 1am.  He was inspired by all the participants.  “I can’t believe, watching all these people, all the ages and sizes crossing this finish line.”  That year each Ironman participant was given a red wristband which they were supposed to give to a volunteer who stood out to them.  One of the race participants gave Brett a red wristband.  Brett made a vow to himself in that moment, not to take it off until he crossed the finish line himself.  Brett’s wife Niki verified that in fact Brett did not take it off for anything, even to swim or shower.

Brett officially signed up for the “IRONMAN Louisville 2018”.  Not knowing exactly what he was in for, he was very excited.  Two days after signing up for the race, Brett found out that the Crohn’s and Colitis Foundation would be the official sponsor charity of the race.  Also, he realized that the race would take place EXACTLY 10 years to the day, of the day he was rushed to the ICU for his complications of Crohn’s disease.  What a tremendous coincidence, that the race would be raising awareness for the charity closest to his heart, and on that exact same day 10 years later.  One of the reasons he had signed up for the Ironman in the first place was to encourage those who currently struggle with similar physical things to know that there might be light at the end of the tunnel.  He said, “If you have the drive and the ambition and the desire to succeed, you CAN get better, you can be in remission and you can do big things!”

Brett started running more, cross-training more, had an injury, and recovered, then started full training for the Ironman in April 2018.  His biggest fear at that time was the long bike rides, only because of some bike/car accidents he had heard about.  But he faced his fears and trained diligently.  He became fairly confident doing the biking and swimming, and he told his wife, “If I have to walk the marathon, I will, but I’m crossing the finish line.”

Milestone staff member Christina Arnold introduced Brett to another Milestone member in cycling class, Tony McCracken, who was training for a sprint triathlon.  Brett and Tony became great friends and their families got together for dinner on several occasions.  Tony was a great encourager for Brett and a good friend who could keep him accountable with his training.  Brett’s wife Niki said, “Friends and family supporting his training was very motivating for him… He’s met enough people along this journey that he could glean knowledge and encouragement from, that we haven’t had to seek officially coaching for him.  He’s made some great friends along the way.”

Brett’s daughter was his hardest coach.  She would say, “If you’re going to be an Ironman, you’re going to have to train!  You said you’re going to do this, so you’re GOING to do this!”  When he was training in the basement, she would run on the treadmill next to him while he was biking, so he wouldn’t have to be down there by himself.

Brett and Niki ended up coaching their daughter's cross country team this year, and many of the students and parents supported and encouraged Brett toward his dream of completing the Ironman.

Niki said, “I remember after he got diagnosed (with Crohn’s), he got a tattoo that said Live Your Dream.  It’s on his wrist so whenever he looks down he can see it.  If you can dream it, you can do it.  He relates that back to being able to overcome obstacles you think are impossible.”  Regarding the Ironman, she notes that being out for a grueling experience for 16 hours is tough for anyone, let alone someone who has an autoimmune disease that could hit at any time.

Brett has trained at Milestone for the Ironman over the past year and has improved his overall health and fitness along the way.  In June of 2017, Brett’s body fat was 24.5% and his metabolic age was 48.  Fast forward a year later, and his body fat is now 14% and his metabolic age is 19, not to mention the 18 pounds of muscle that he has added!  Milestone personal trainer Christina Arnold explained, “Brett’s visceral fat rating went from an 8 to a 5 which means he has significantly decreased his risk for a cardiovascular or metabolic disease.  Brett’s changes physically are obvious, in fact I would say they are day-and-night different.  But you know what, his confidence and the joy that has come from his fitness journey is even more incredible.”  Brett had a physical exam with his doctor recently in which the doctor identified a clean bill of health!  This, when 10 years ago he was in such poor shape.  Brett has made a complete transformation.

On September 18th 2018, Brett officially got his “Bib number” for the Ironman.  He said, “It’s getting real.”  His wife said, “After watching the blood, sweat and tears… we’re going to be a hot mess at the finish line (crying).”

Brett’s parents from Florida, along with many other family members and friends, came in to cheer him on at the Ironman race on October 14th, 2018.  Brett said, “The calm before the storm has officially set in. I am checked-in and packing my transition bags. Here we go!”

By the end of the night… Brett had crossed the finish line.  He completed the Ironman.  Brett said, “Well I finished. The bike was bitterly cold. Almost a thousand people dropped out from the race and a big portion of that was due to hypothermia. I was frozen by the time I got to mile 60 on the bike to get some warm clothes out of my special needs bag. But I got it done! Thank you to EVERYONE who was a spectator and supporter but a huge thank you to my amazing wife Niki for all the encouragement and support. There were tears of joy at the finish line. I AM AN IRONMAN!”

Milestone personal trainer Christina Arnold said, “I will never forget seeing him run, during Ironman this year.  I found him in the crowd of runners and there he was, SMILING, in the rain and all!  That showed his spirit and passion and love for what he does now... It's so incredible considering where he has been.”

A giant congratulations to Milestone member Brett Workman on completing the “IRONMAN Louisville 2018”.  Thank you for being dedicated and accomplishing this amazing feat to show what is possible with determination, a positive attitude, and passion!  You have overcome so much and have inspired us all! 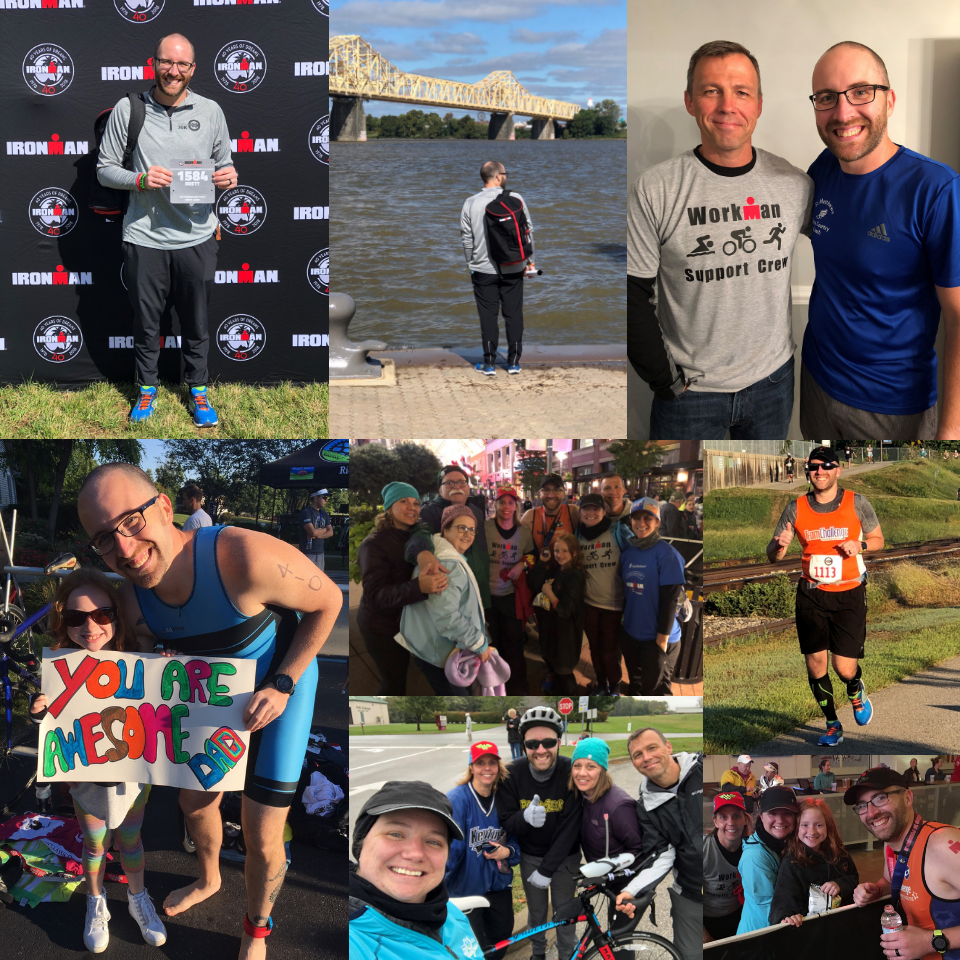