Member of the Month: Norman Lytle

January, February and March, Norman’s average number of steps per day has been 10,000!  This is the equivalent of walking 5 miles per day!  At 81 years old, he has made his health a priority, and gained a lot of intangibles along the way.

“Milestone has many benefits to me.  Physical, social… multiple facets”

In 2011, Norman’s wife Martha was diagnosed with breast cancer and was scheduled for surgery.  She started doing physical therapy upstairs at Milestone and Norman would go with her to keep her company.  They both decided to join Milestone.

Norman went to the doctor in December and was told that he had high cholesterol.  The doctor wanted to put him on cholesterol medicine.  Norman wanted medicine to be the last resort, not the first resort.  So, though the doctor wrote a prescription, Norman never filled the order to go pick it up.  The next time Norman walked into Milestone he saw a cardboard cutout display of a man who had lost 100 pounds in the HMR weight management program at Milestone.  The next time HMR did an orientation session, Norman attended.  The man who had lost 100 pounds was actually there and spoke at the orientation! This man shared that he too had been diagnosed with high cholesterol and had been prescribed medication, but since losing weight in the HMR program and exercising at Milestone, his doctor had discontinued his cholesterol medications.  This inspired Norman to try the same thing.

So, when Norman had his next appointment with the doctor, he admitted that he had not picked up the prescription yet, and he shared with the doctor what he had heard about the man at the HMR orientation.   Norman reasoned with the doctor that he would at least like to try improving diet and increase exercise to become healthier first before opting to take the medicine.  The doctor said a change in diet/exercise probably wouldn’t make more than a 5% difference on the cholesterol levels.  But the doctor agreed to let him try to lower the cholesterol by alternative means for 6 weeks and then check the levels again.

Norman started Phase 1 of HMR and by the end of the 6 weeks when Norman went back to the doctor, his cholesterol was down 30%, triglycerides were down 60% and he had lost 20 pounds!  Needless to say, the doctor did not give Norman any medication that day.

Norman continued participating in the HMR weight management program, and at the end of March, moved from Phase 1 to Phase 2.  He stayed in maintenance for 2 years to help him develop permanent habits to keep the weight off.  Norman lost a total of 45 pounds in HMR and years later, his cholesterol numbers are still down.  Norman still enjoys using the HMR products.

“I love putting two scoops of HMR 120 shake mix into my coffee in the morning!  I mix it together in my HMR Shaker Cup!”

Norman’s wife Martha had been doing physical therapy at Milestone after her double mastectomy.  Martha had to cancel the last physical therapy session because she was in the hospital.  In 2014, Martha’s cancer metastasized.   Martha passed away on January 30, 2015.  Norman lost his wife of 57 years.

After Martha died, Norman knew he needed accountability, so he set up personal training with Mary Hayes.  She knew Martha and their story, so she was not just a personal trainer, but somebody that Norman could talk with.

“Grief is still there; it is there every day.  But it is important in the grieving process to have safe people to talk with who are actively listening and caring, not just dismissing the feelings you have or telling you to get over it.  So, by coming here and talking with people who care, the grief is becoming less and less.”

Norman was diagnosed with an aggressive form of prostate cancer in early 2011.  He began 9 weeks of radiation in the summer which weakened his body and decreased his stamina.  Mary Hayes continued to personal train Norman and help him regain his stamina by doing exercises like climbing stairs.  This training effectively helped him get back on his feet and regain strength and cardiovascular endurance.

He continues to personal train with Mary Hayes regularly, and has benefitted greatly from working with her.

Currently at 81 years old, Norman exercises 3-4 times per week at Milestone.  He is in great shape and in great spirits.  He is a joy to be around and the Milestone staff enjoy spending time and sharing stories with him.

Norman uses the iPhone “Health” App to track his steps per day.   In August 2016, he started averaging 10,000 steps per day!  In September, he fell and broke his hip.  He had hip replacement surgery and his surgeon said that walking would be the best activity for rehab/recovery.  Norman was also set up to have physical therapy at Milestone with Pam Beury for 5 weeks.  Norman benefitted greatly from working with Pam and was soon on his way to recovery.  It took about 4 months for Norman to get back to his pre-injury fitness level.  But by January 2017, he was back to 10,000 steps per day!  Norman’s best day in January was over 13,000 steps!  In February and March his average has been 10,000 steps per day.  This is the equivalent of 5 miles per day!

Norman also volunteers at Baptist Hospital in the oncology unit.  On the days he volunteers at Baptist, he walks the long hospital hallways for extra exercise.  He often comes to Milestone even on his “days off” (when he does not have a personal training appointment) just to get lunch at the Café.  Some of his favorite items from the café are the turkey burger, vegetable soup, chicken salad, and HMR smoothies.

Of his entire experience at Milestone, Norman says…

“The obvious benefit is physical, making me stay active instead of withdrawing.  Second is the friendships that have developed with all the staff, to compensate for the loss of relationship (spouse). Friendships grew out of empathy.  Underlying all that I’ve done at Milestone, from HMR, to personal training, the physical therapy program, even the front desk and café… Underlying all of this, is friendships.  What began as a professional arrangement became deeper friendships when I found that so many of the staff members actively listen and care.”

Thank you, Norman, for sharing your journey with us here at Milestone!  Your positive attitude and your fitness achievements have inspired us all! 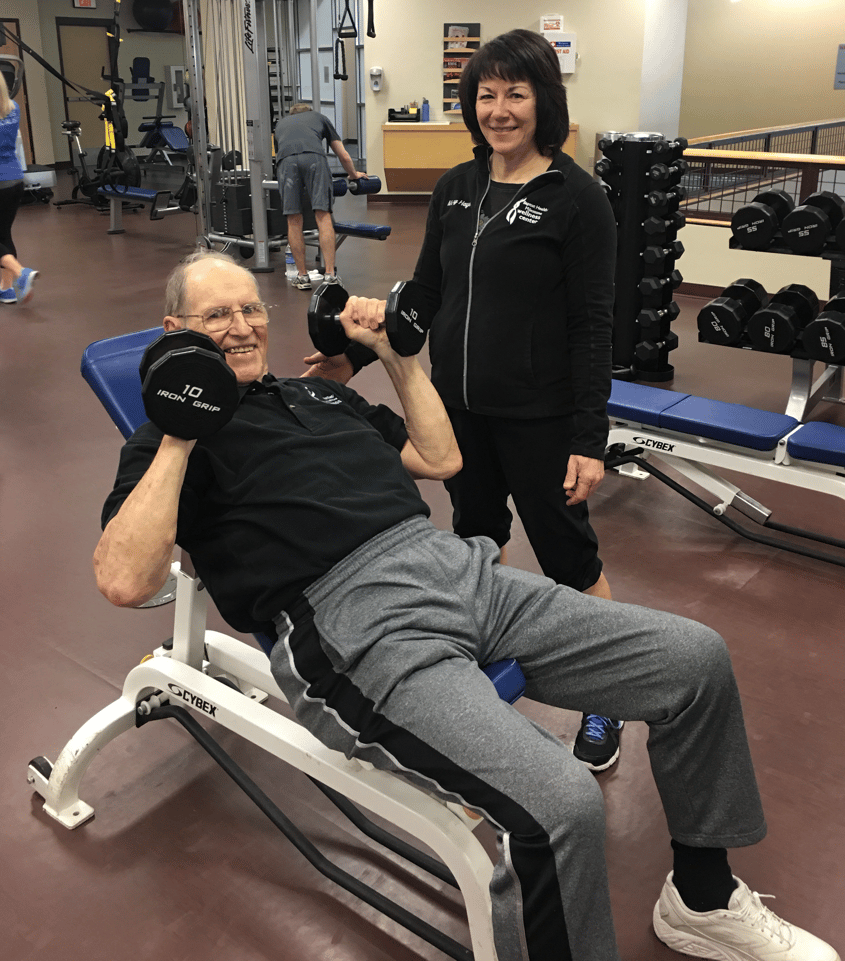