I started coming to Milestone in 1993.  I’ve been exercising since I was 16 years old. I had back surgery and had to get metal rods in my back. 11 Years ago I got cancer. It’s lymphoma (in the blood) so it’ll never go away.  I do radiation and once in a while, chemo.

Last May, I had a major stroke.  I’m fighting to get mobility back in my hands and feet.  The neuropathy is really bad.

My wife has been very much an inspiration to me this entire time.  She’s not an exerciser herself, but she’s my greatest cheerleader.

I did physical therapy and occupational therapy for a while, and it was good and everyone was very helpful. But I wanted to progress at a faster pace, so I now do the exercises on my own.  I do 400 ab exercises, stretching and leg raises, machines, about an hour of hard work.  I have chronic fatigue, so I work out until I can’t work out anymore.  Though I’m tired right afterward, later on in the day the energy is increased.  Exercising has helped my overall energy level.

My cancer doctor said the people who are diagnosed and then proceed to sit around all day and not do anything, typically get worse and rarely make it.  The doctor recommended being active.

I told the doctor when I was diagnosed, that I’m not going to die of cancer.  That’s not what’s going to kill me.  I’ve been fighting it for 11 years.  I’m now doing what I’m doing here now by the grace of God.  Who knows, maybe there’s a bigger plan.

Some Milestone staff members who have been helpful to me, are Sue, Gary, Martha, many friendly faces like Misty, Melanie, Kenny.  I’ve been a lot of places and this is the best place I’ve ever been.  That’s both the facility and the staff.

Everyone up there at the round table (up by Sue’s office) inspires me.  Jim Morrow, Wilton Murphy, Chuck Shannon; we’re like the 4 musketeers, we have fun with each other.  There are about 15 people who are all great friends up there, without mentioning them all, they all inspire me.  The comradery, the fellowship is very special to me.

I have some fitness goals that I’m working toward.  I tried to fix a gate recently but had trouble using the tools like I used to.  So I’m working on getting mobility back in my hands so I can do the outdoor work at home which I enjoy.

At first after the stroke, I couldn’t tie my shoes.  The day I got that back, and was able to tie my shoes… That was a balloons and confetti day.

An inspirational Milestone member Martha lost her arm. It took her a year to get back to her daily activities.  She’s a big inspiration to me.  Another lady Ayako is Japanese American, she’s 90 years old and despite losing her husband and fighting numerous medical challenges, nothing slows her down.  She’s an inspiration to me.

There’s a lot of people here getting older, but they’re still fighting.  When you get older and keep plugging, that says a lot about you.  Part of that is that Milestone is a great place to come to.

In 2009 Michael Riley won an award from Concept 2 for rowing 5,000,000 Meters on the rowing exercise machine.  He is currently pursuing his goal of completing 10,000,000 Meters.  He has only 900,000 left so he’s working towards getting back the physical ability to row so he can complete this. 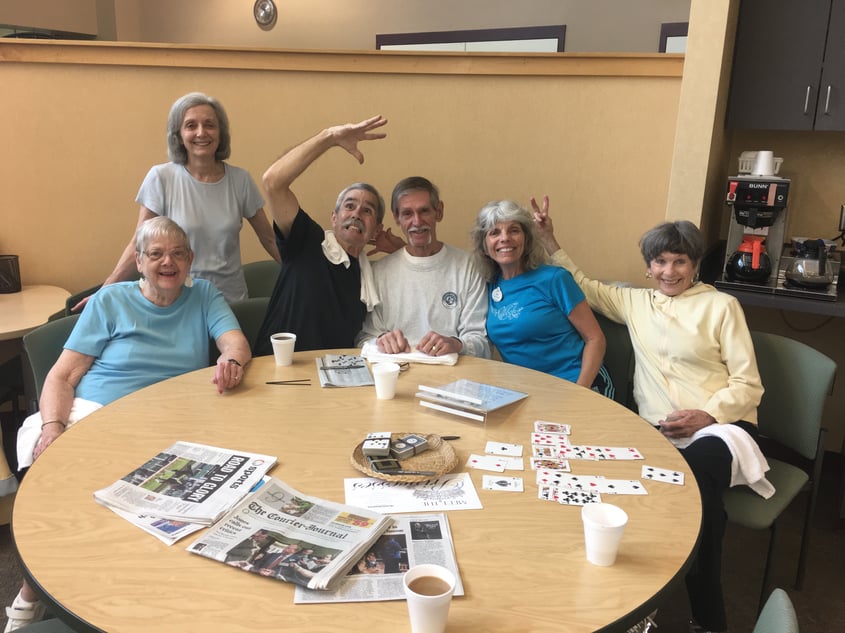 Michael Riley (in the center, wearing a white shirt) sits with his friends up at the round table near Sue's office.  He enjoys the comradery and the fellowship of the other Milestone members and staff.

In 2009 Michael Riley won an award from Concept 2 for rowing 5,000,000 Meters on the rowing exercise machine.  He is currently pursuing his goal of completing 10,000,000 Meters.  He has only 900,000 left so he’s working towards getting back the physical ability to row so he can complete this. 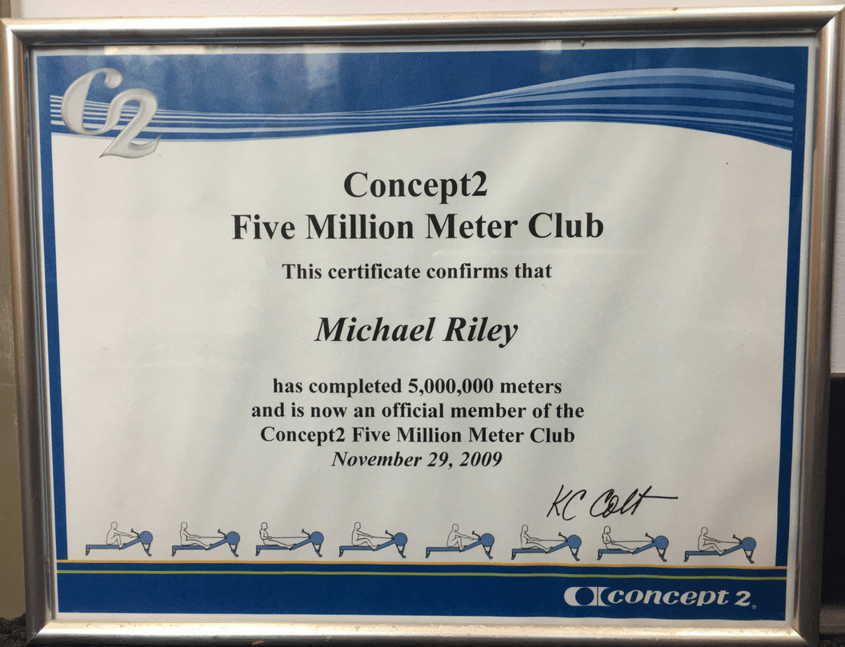