Written by Kayla Fitzgerald, who is a Milestone Staff Member in the child care department...

“I am 18 years old and I am a competitive Irish Dancer. I have been dancing since I was 2 and found Irish Dance when I was 7. In April I will be attending the World Irish Dance Championships for the 2nd year in a row. This year they take place in Dublin. Last year they were in Glasgow. This year at our regional competition in Chicago, IL I placed 4th for the under 18 Ladies category and I am currently ranked 27th in North America for the under 18 ladies category. I practice 6 days a week for between 1-2.5 hours each. I also do personal training with Alison Cardozo 3 days a week. Since working with Alison for only about 2 months I have lost body fat and gained muscle. I also received my first ever perfect score at a local competition in St. Louis last weekend. She has helped me control my plantar fasciitis and tendinitis as well!

Here is more on the story of how I qualified for the World Championships...

While last year was an absolutely amazing experience, this year is different.  10 years ago I walked into my first Irish Dance class. My plan was to try it out for a few months and then skip onto the next sport as any other 7 year old would. But something clicked. I walked into the dance studio that day and it already felt like a second home. From that day on I never looked back. In June I attended my first feis (competition) here in Louisville. With no nerves at all I hopped up on stage, danced, pointed and bowed, and skipped out of the venue that day with two second place medals around my neck. The Louisville Feis in June was soon accompanied by attending the Queen City Feis in May every year. And then Cincinnati, and then St. Louis, Indianapolis, Columbus, and more. Before I knew it my summer weekends were filled with traveling to feisanna. I placed well but the idea of Oireachtas (regionals), much less Worlds, was nowhere in my mind. Then came Chicago. In November of 2011, I competed at the Mid-America Region Oireachtas in Chicago as part of a ceili team. This was my first time ever attending an event of its magnitude and instead of feeling overwhelmed I walked in with a feeling of awe.  That weekend it clicked and I was determined to attend as a soloist. As I began looking at larger competitions I stumbled upon Worlds locations. This was around the same time another dancer from my school was attending the World Championships in Glasgow. I told my parents that day "I want to go to the World Championships in Dublin 2017."

It was a slow process but I realized soon this would be no easy task. I still had to move up three levels and then qualify to compete as a soloist at Oireachtas. Some may have seen this as a crazy goal but I was determined.

In January of 2013 all was going fairly well. I had just made it into the class in which I could qualify for the Oireachtas.  I was settling into harder classes and new materials when I was hit with mono. Mono caused me to miss roughly 6 weeks of practices, which made returning once I was finally able a vicious task.

That year feisanna were rough. I placed last or second to last at almost every competition.  I did not skip out with medals around my neck. I left with tears in my eyes and sometimes just anger and frustration with myself. I would sometimes begin to question if it was all worth it. When this happened, Dublin 2017 popped into my mind and fired up my determination.

September of that year I placed 8th overall which put me in the top half of my competition and from then on it was go time.

Oireachtas 2014 was my first major competition. Any dancer’s goal heading into a major for the first time is to recall which means you placed in the top 50% of your competition. Unfortunately, I was 2 places away.

2015 was filled with researching training methods, nutrition for dancers, and spending almost every day at the dance studio. I would practice after school, during school, dance and training was always on my mind.

Again when Oireachtas came around in November my goal was to recall. Just recall. When number 146 was called I about jumped out of my skin. I didn't even care at that point what my overall placement was. That night we went to awards and though I didn't expect anything I listened anxiously as the World Qualifiers were called. At the sound of "1..4..6" I froze. Time stopped and I broke down in tears. I could not believe I was going to Glasgow.

This year however the excitement of awards night was replaced with anxiousness. This was my only chance to achieve the one goal I worked towards for 10 years. The training, the practices, the early mornings, the long nights, the laughs, the tears, all came down to one moment. Waiting backstage I looked down at my wrist which had "Dublin" written on the inside; something I had done at the beginning of the year to push me all the time. The announcer began with the World Qualifiers and I felt physically sick to my stomach. Then I heard the number "1..3..1" and it felt as though a 100 pound weight was lifted off my shoulders. This year though I didn't break down into tears. I just smiled. I smiled because I knew that I had finally done it.” 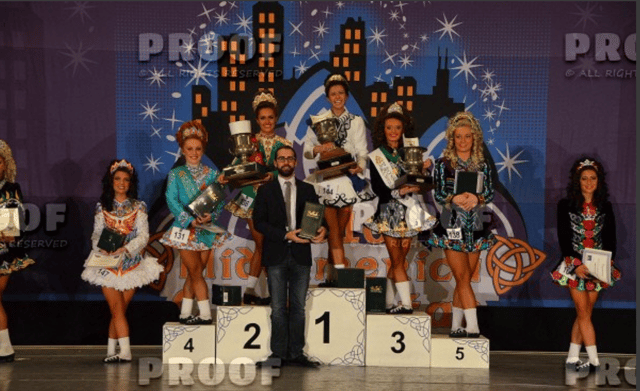 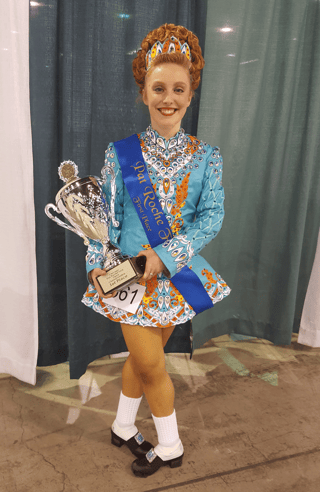 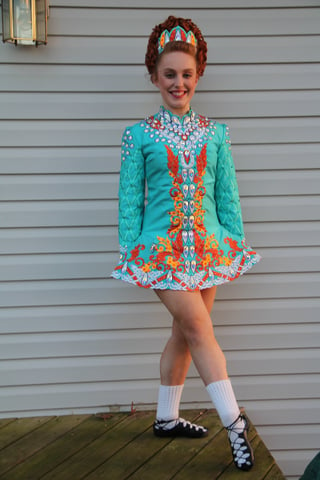