Meet Milestone member Kim Amico. In January of 2022 she decided to set a big goal for herself and set out to accomplish it. 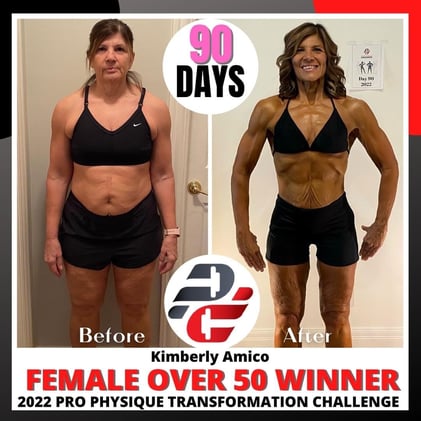 She competed in the 2022 90 Day Physique Transformation Challenge! With the guidance of Milestone trainer Kenny Hodges she put in the hard work and completely transformed her body. We are so excited to share that she WON 1st PLACE in the Female Over 50 Category of the competition. Kim recently shared her story with us & we knew we had to share it with you all.
Read below about Kim's fitness journey and the obstacles she overcame:

My unhealthy relationship with food and body image began at 10 years old. The year was 1977 and my parents decided their 10-year-old daughter was a little “fluffy” and signed me up for Weight Watchers. After eating cold cans of asparagus juice and all, as it was a known diuretic, I proudly lost 6 pounds to reach my goal and become a Lifetime Member. This; however, was only the beginning to what would become a forty-year struggle with body image and my weight.

By my early thirties, some would say I was living the American dream. Three young children with a fourth “bonus baby” on the way as I approached forty. I devoted my life to them; to making sure I gave them the best upbringing I possibly could. Soccer games, play dates, and birthday parties now filled my days. Raising four kids was wonderful and exciting, yet equally stressful and chaotic. Those busy days were accompanied by fast food, cookies, and lots of easy processed foods. I ballooned up to 297 pounds, the heaviest I have ever been. Feeling miserable, embarrassed, and defeated, I would once again head back to Weight Watchers. There I would lose about 100 pounds, but my self-esteem and body image issues would persist for years to come.

In 2016 I found myself at a small gym in Syracuse, NY that would soon transform my relationship with physical fitness. As my children were beginning to ”leave the nest,” I was finally ready to take charge of my health and happiness. For years I had failed to prioritize my own happiness, and it was time to stop putting myself on the back burner. I learned the power of strength training and body re-composition, and for the next five years my weight would hold steady, but I always longed for more. I would attend local bodybuilding/bikini competitions and dream of having those shredded muscles and that elusive six-pack. As a woman in my fifties; however, I had been told by the world that it was too late for me to make such a radical change, and for a long time I believed them.

I quit last year’s challenge only three weeks in, so I was nervous about entering a second time. After all, women my age aren’t supposed to be able to compete. It’s impossible to gain more muscle after going through menopause. Our worth is diminished once we pass those childbearing years. These are all the tropes that society tells us as women, but I was determined to set the record straight. Not only are those barriers set by society untrue, but as a woman over fifty, I have wisdom and mental fortitude I never dreamed of having when I was thirty. Quitting would not be an option this year, so I was determined to not just set myself up for success but to win the whole damn thing.

The discipline for training was there. The alarm goes off at 3:00am and I get my morning lift in before most people wake up. It was the nutrition plan that I knew would be the most important and hardest element for me, especially cutting out all the junk foods I was eating. But for these 90 days, I made a commitment: keep it simple, eat clean, and avoid all sugar and processed foods. In the past, I might have said, “I can’t give up cream and sugar in my coffee,” or, “I can’t give up dessert with dinner!” After going through this process; however, I’ve realized it wasn’t that I couldn’t, it was that I wouldn’t. It struck me that when you cross the “t” off of can’t and won’t you are left with “I can” and “I won.” That became my mindset and my mantra for the next 90 days leading me to becoming a finalist. All that is left is to win. That being said I have already won my personal victory by renewing my passion for fitness and pushing my body to a new level of excellence. 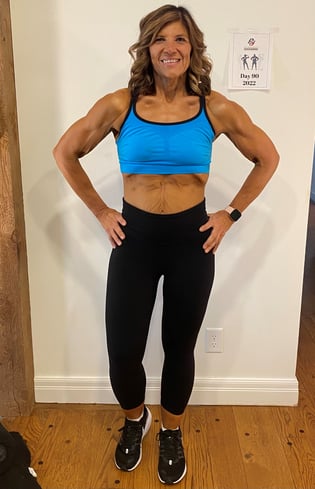 Throughout the 90 days, I have learned that I am a fighter who possesses grit and discipline. I am far more powerful than the foods that once derailed my success. Food is not an enemy I need to fear, it can be a powerful tool that helps me transform my body despite my past. For many years I focused on what I perceived as barriers that would prevent me from ever reaching my goals. I told myself I was too busy raising kids to eat healthy. That it was somehow selfish to prioritize my own wellness. That I was too old, and it was too late for me to make a change. I couldn’t have been more wrong. These things I told myself were not insurmountable barriers, they were just obstacles. Obstacles may knock you down and test your will; however, as long as you get up and keep pushing through, there is no obstacle you can’t conquer.

Through my results in this challenge, I hope to be able to use this platform to inspire women and men of all ages that it is never too late to make changes to your body. It is important to continuously challenge yourself mentally and physically throughout your life. Personally, I look forward to setting my next goal and giving it the same grit and discipline that I gave to the past 90 days.